Suzuki Hajime
Senzui
Shio Sakaki
Akira Hongo
Mikumo Kushinada
Hayato Fūrinji
Silcardo Jenazad
Diego Carlo
Rachel Stanley
Bunshin is a ancient technique where you move your body in special way with great speed so that you are able to create the illusion of creating clones of multiple numbers of yourself in order to confuse and outnumber your opponent. This technique has been adapted by multiple martial arts styles as countless martial artists have been seen using this technique, and each person has been seen creating a certain number of clones. 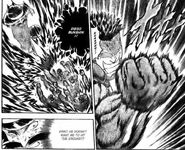