To reconcile with the earth

Kagerō Kii was a former member of Yami Armed Divison and Allied of Ryouzanpaku.

Kii is very tall and thin man with long arms and legs and a rather lanky figure. He wears a dark suit similar to Lugh's and has dark eyes and pale skin, along with very silky hair pointing upwards. He has rather dark lips. He carries his sword on his back in a dark black scabbard with a dark strap across his chest. After losing Setsunamaru, Kii began carrying wooden practice swords with him as temporary replacements and still wore his strap to add on to the illusion of still having his weapon. After gaining his gardening hoe from Shigure Kosaka, Kii stopped wearing his strap altogether and began carrying his hoe with him everywhere.

Kii is introduced as a master who is rather careless in his skills, as he cuts down one of his own allies reflexively and unconsciously while he meets with them to hunt for Shigure Kosaka. To compensate for this, he gives out instructions for dealing with him, amongst them to never point a sword at him, never insult him and to stay three meters away from him. He is quite courteous to both his allies and enemies, however, and he tends to become very excited in the middle of a fight

After Shigure takes Setsunamaru from him, Kii becomes extremely underconfident in himself, reduced to cowering in his shack while birds built a nest in his hair. This extends to his honor as well, as he openly begged (and cried) Shigure to give him back the sword without any regard for his dignity.

Kii holds Setsunamaru dear to himself, likely because any other blade he uses quickly breaks from his power. His love for swords extends to a disinterest in women, whose faces he is never able to remember (he only remembers Mikumo Kushinada after recognizing her techniques). In fact, he has to be reminded of Shigure's name sometimes, as he refers to her as "Mic-chan". He will use other swords if deemed necessary but will feel no connection with the weapon, though when he does use the Akabanetou, he proclaims his realization of momentary love for the new sword and cries for Setsunamaru to forgive him for his infidelity.

Since having gained the Hoe from Shigure, Kii willingly left Yami and took a turn in life, as he became much more kinder and thoughtful, having no longer hold any ill will to Shigure or Ryozanpaku anymore and now lives a humble life of peace. He's also grown fond of farming, having used his new weapon for farming purposes such as cultivating plants and caring for livestock. He's also grown to care for Shigure now, as he willingly allied with Ryozanpaku to help save her and was more than willing to fight his former Yami allies to save her. However, he is willing to kill them, suggesting he may retain some of his Satsujinken beliefs (though he said it in a comedic manner, suggesting it was just him losing his temper).

Another thing to note is, after receiving the hoe from Shigure he came upon an injured bird next to him on the ground, put it back on the tree and started to care for them until one day he saw one of the injured birds and when he went to the next he noticed that the nest is empty and a snake just finished devouring them. He realized that in some ways he was the snake that hurt and ruined many lives and he felt overwhelmed with guilt claiming that he is beyond forgiveness but he still wants to give his life to save Katsujinkens and the pride of Satsujikens which he did since he saved Akisames life and was able to help ONSF realize that even if they are Satsujinken they should have some pride and honor as martial artists.

He has a habit of saying "Nyo" when he gets riled up.

During Shigure's childhood, Kagerō Kii is seen walking out of her father's shack, admiring the new sword he received. Yearning to test out the new sword, he sliced a bird in half prompting the then unnamed Shigure to attack him; but quickly dodges the attack. Were it not for Hachirobe's insistence that Kii leave immediately, he would have killed her. Before he left, he told her that she had to wait a few years for what awaited her next, leaving a shadow in her heart which she describes as her "trauma".

During his fight against Shigure, he stated that he killed people to improve his skills and that's the only way he knew how to improve as a swordsmen.

In should be noted before giving his life to save Akisame's, he stated that he has killed many people because he was born as a satsujinken, and killing was all he knew and had lacked the moral guidance to know any better since during his fight against Shigure, he stated that he killedy people to improve his skills as a swordsmen and that's the only way he felt could do so effectively.

Years pass and Kii meets with several other bounty hunters to kill Shigure, and accidentally cuts one of his teammates. He gives the rest of them instruction booklets detailing the habit to compensate for his mistake. He is notified of Shigure's presence, and witnesses the defeat of the rest of his teammates. He hands her an instruction booklet as well, and is infuriated when she cuts it up, saying that anybody who does so will die. This prompts Shigure to ask if he remembers her, to which he mistakes her for "Mii-chan" (implied to be Mikumo). While he does manage to cut her overcoat, he is unable to lay a scratch on her as she deflects the sword with only her bare hands. The fight carries on to inside a nearby building, where he manages to cause some injuries to Shigure, who cuts his wildly spiking hair and continues to insult him with the words "sea urchin" and "flatfish face". Kii knocks an attacking Tōchūmaru into a pillar, angering Shigure and prompting her to use the cutting edge of her sword against him, defeating him and making him realize Shigure's true identity, noting that that is the reason why his Setsunamaru refuses to cut her. He falls, still grasping his sword, which Shigure takes forcefully from his grip.

Shortly before the Battle for the Akabanetou, Kii is later visited by Mikumo Kushinada and her disciple Chikage, on an errand for the Akabanetou so that Chikage may witness weapon combat. He is seen curling up in his large shack, depressed to the extent that birds made a nest out of his hair (an ironic note, considering that he killed Shigure's first friend, who was also a bird) and with broken swords laying about him. Again unable to recognize Mikumo, Sai takes up her offer for one of the Akabanetou, a new sword he could use that would endure his strength. During the Battle for Akabanetou, Kii is brought to Kenichi by Mikumo, and promptly clings to his legs begging for Setsunamaru back. He then grabs Kenichi and rushes to the site of the Akabanetou, during which he retrieves one of the swords and tests it out, easily slicing through a fellow weapon-user's weapons. However, this does not satisfy him, as he claims that "there is no chemistry between us", and then begs Shigure for Setsunamaru back. He turns on his compatriots when he accepts Shigure's offer to give him a weapon if he protects Kenichi, becoming successful in doing so.

In the aftermath, Shigure gives him a hoe made by her father that "matched his feelings the most". After some initial tension, he grabs the Hoe and runs outside, cleaving the earth happily with his new weapon. It is noted afterwards by Shigure that Setsunamaru wants to return to him as well, to which she replies "One day, you will ...".

After the battle between the Shinpaku Alliance and Yomi, Shigure pays a visit to Kii along with Apachai, Kenichi and Miu. Shigure asks if he gathered the "stuff" for her, to which he did, as it was revealed to be bags of dirt and a device for extracting iron sand from the dirt and sand she gathered. The purpose of this was for Shigure to forge the iron sand into metal, which she can use to provide arms for the Shinpaku Alliance. He and Apachai were seen forging metal very wildly to the point Kenichi and Miu left out of fear of what they could do.

Later he is seen with Akisame Koetsuji, Shio Sakaki, Apachai Hopachai, Kensei Ma, James Shiba, and Danki Kugatachi rescuing Shigure Kosaka. He helps engage battle against the military while noting he can finally hear himself think. When Mildred attempts to kill Danki with an arrow, Kii saves him and later is confronted with the rest of Ryozanpaku to the Yami and Hachiou members present. After Ryozanpaku makes the first move, Kii engages battle noting play time has come for them.

He was seen engaging battle against Rin, agreeing to watch Danki's back. Rin, who is fighting with Kagerō, asks why he has switched sides. Kagerō explains that because of the hoe Shigure has given him, he has realized he does not dislike the peaceful ground and has come to emulate the feelings contained in the hoe. He adds that Shigure cannot die until she has given his sword Setsunamaru back to him and goes on the offense. He then almost deals a wound to Mikumo when she takes her eyes of him for a moment, to which Sai warns her not to.

After Mildred recovers her bow, she unleashes a furry of arrows, as Mildred focuses her eyes and shoots at the Katsujinken masters directly, forcing them to dodge Mildred's strikes along with the falling arrows.

Kagerō Kii and Mikumo are fighting and Mikumo announces that the time for their defeat has come as she produces multiple clones and surrounds Kagerō. Kagerō unleashes his secret technique but Mikumo evades it, appearing behind Kagerō and slamming him into the ground.

Just as Mildred is about to attack with her Double Pupil Bow: Writhing Hedgehog, a voice is heard coming from the ground and it revealed to be Kagerō. He has recovered thanks to "the earthworms and the crickets cheering [him] on" to defeat Mildred for all the arrows she has struck into the earth. Mildred aims her bow at Kagerō but he stands and uses Hidden Sword Technique: Otogoe no Tenchigaeshi, running in circles around the battlefield and clearing it of arrows.

Mildred aims her Writhing Hedgehog at Kagerō and the attack connects, causing him to stagger and to let go of his weapon. Despite the damage Kagerō reclaims his weapon and completes his technique, clearing the battlefield of arrows. Kagerō then falls uncounsious after an attack from Seitaro Raigou. When Hayato Furinji calls all martial artist that follow their beliefs as martial artist, Kagerō heard the message and wakes up. Just as Akisame is trapped between arms and Seitaro is about to deliver the finishing blow, Kii intercepts the attack and punches Seitarō in the face, breaking his sunglasses. Kii begins to prepare an attack meanwhile remembers his previous life as a Satsujinken martial artist, but states that he will give his life for helping Katsujinken fighters and Satsukinken fighters' pride. Just then, Mikumo rips apart Kagerō Kii, killing him definitively. 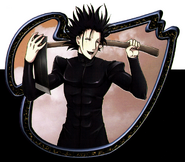 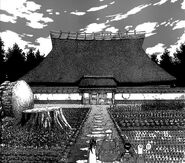 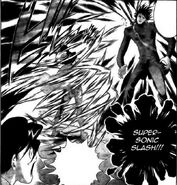 Add a photo to this gallery
Retrieved from "https://kenichi.fandom.com/wiki/Kager%C5%8D_Kii?oldid=41613"
Community content is available under CC-BY-SA unless otherwise noted.