Masters who are able to go beyond the physical abilities of a grand master are considered to be above Advanced Grand Master level, to which they have become powerful enough to be considered legendary in the martial arts world. So far there are only two master class fighters revealed to have reach above advanced grand master level, the elder of Ryōzanpaku, Hayato Fūrinji, and the leader of the Hachiō Danzaiba, Ōganosuke Yogi, who have both been considered legends in the martial arts world. While Silkwat Junazard was never officially confirmed a Legendary Master, he still was legendary, as he was able to give Hayato a difficult time during their fight and pull off feats similar to his own. And while he was never stated to have been invincible, he was said to have been a perfect warrior. Despite being one step ahead of advanced grand master martial artists, a advanced grand master can still be able to fight on close enough terms with someone who of legendary master level if they have enough skill and strength or even defeat/kill them. 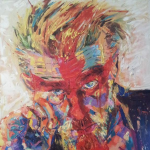