Yomi
The Shinpaku Alliance is an organisation of Disciples created by Haruo Niijima in order to gain power and facilitate his goal of world domination. Which inevitably created a rivalry between them and Yomi.

The alliance was first introduced when Niijima comes to Kenichi's rescue in his fight against Kisara's group. It is formed by a motley crew of individuals: from refined martial artists seeking powerful opponents to expand their scope of experience to loyal pawns whose loyalty was garnered by a leader (Niijima) adept at fabrication. Those unskilled in fighting are trained by Niijima for information gathering. The organization itself has a signature gesture, which is done with the right arm performing a spinning motion at the front and then stops with the fingers outstretched and palm facing outward and the pinky finger separated from the rest of the fingers. It is interesting to note that, as of the current time, the Alliance is comprised mostly of students from Kōryō High School and converted ex-members from Ragnarök.

The group is led by Haruo Niijima who supervises the activities of the group. Notable Shinpaku members include Shirahama Kenichi (honorary captain), Ikki Takeda (The Puncher), Kaname Kugatachi (Freya), Hibiki Kugenin (Siegfried), Chiaki Yūma (Thor), Kisara Nanjō (Valkyrie) and Kōzō Ukita (The Thrower). Miu Fūrinji is not an official member of the alliance (Kenichi was unaware that he had never invited her to a meeting) and would only appear when they needed help. After Renka Ma transferred to the school, she officially joined the alliance. Kyōichi Takame (Loki) and Tōko Amada (Number 20), who opened a detective agency after Ragnarök disbanded, although not part of the Shinpaku Alliance, will often work for Niijima who is their main employer.  Yami and Yomi consider the Shinpaku Alliance as part of Ryōzanpaku.

Upon its introduction, the Alliance initially made use of Kōryō High School's physics club room as its makeshift base, superimposing the Alliance's name over the rooms's sign, the physics classroom continue to be the meeting place for its members and visitors during their school times for the entire story, but as the organization grew and assimilated former members of Ragnarök, it used and renovated an old building, which was Kisara's former base, as its own headquarter. Niijima filled it with traps in case on an invasion and even built a gym for the fighters to train, not to mention an entire computer network for the more mundane and secretive part handled by Niijima himself.

As of Chapter 200, the Shinpaku Alliance had introduced its official symbol and its website. After the D of D Tournament Niijima officially rented the building by telling Kisara's father that they were trying to save her from the world of delinquents. It was single-handedly financed by Siegfried while Niijima completely restored the building. The new building has the Alliance logo on the outside, the name on the entrance, and a brand new gym on the inside.

In the Yomi arc, the Shinpaku Alliance participates in theDesperate Fight of Disciples and manages to reach the final round of the "Chi" group. However, due to the injuries sustained by its core fighter members throughout the tournament and their final opponent being none other than the fearsome Shō Kanō himself, Niijima forfeits the match. When Fortuna's island was being attacked, Fortuna was blocking their escape, since he wanted all the captains (except Ukita) as his children. They were all outmatched at first with the difference of power with Fortuna being at master class and all their injuries, but when Hermit arrived, Nijima was able to devise a plan to defeat Fortuna with their combined power.

When the Valkyries told the Shinpaku Alliance that Freya and her grandfather, Danki Kugatachi, were captured by Yami's Armed Division, the captains (accompanied by Shigure) went to rescue her. Except for Ukita and Nijima (the latter was just dodging), they easily overwhelmed the thugs after Kenichi took down the first one. After Freya and her grandfather were rescued, the latter wrote a letter complementing the Shinpaku Alliance that they convinced him to pick up his staff once more to fight for justice by attacking a master class weapon user of Yami.

The Shinpaku Alliance followed Ryōzanpaku to Okinawa to help Kenichi in his fight against Yami's Armed Division. Ryōzanpaku left the disciples (except for Kenichi, Miu, and Nijima who had been taken accidentally by Apachi) back at the hotel scouting for Yami unaware that everyone else is invading the Okinawa base to stop Yami Armed Division.

When Kenichi returned to school with Miu, he explained to Nijima, Takeda, Ukita, and Kisara that Ryōzanpaku was wanted by the police, which is now being controlled by the Pro-Yami faction of the government. With Chikage, they went to Inspector Honmaki's house for info about Yami. However, they found him attacked by armed members of Yami. After the battle, Inspector Honmaki told them to leave before they would arrested for attacking Yami members. They were watched over by Rimi, who was impressed by their skills.

In a forest, they tried to get the evidence to Ishida only to ambushed by several Yami weapon users. During the fight, Rimi managed to steal the CD from Nijima so Miu had to follow her. The others were having a hard time until Siegfried and Freya arrived from parachute to even the odds and helped defeat them. Thor came down to help Miu by accident when he landed far from the others, because of his fear. Unfortunately, Thor accidentally broke the CD during the fight having Rimi retreat. Luckily, Nijima had the real evidence in a jump drive only for it to be destroyed by the "hostage", Ishida. The Shinpaku Alliance was about to go into a losing battle until Sakaki arrived and defeated Ishida. Nijima then revealed to Ishida that the evidence was already scattered throughout the internet clearing Ryōzanpaku's name. Sakaki then congratulated the disciples for their improved skills.

As the Alliance discovers the location of another Yami base, they head out but are forced to stay due to the masters telling them to. They are greeted then by a limo with Ryuto and Berserker and another member named Lugh. As Siegfried and Thor fight Lugh, they are both overwhelmed and Takeda steps in to fight him. As Takeda almost gives up his left arm, Ukita and Kenichi stops them from hurting each other and Lugh and the others leave when he notices Shigure about to arrive. They all then go to an amusement park to have fun before they fight YOMI again. However, at night, they are greeted by YOMI and all prepare to fight them.

After the majority of the members and captains leave high school to attend university or travel the world the organization continues, this came as a surprise to some as they saw it as but a group of delinquents. However, Niijima had planned and managed to expand it globally. Now it is seen as a well-established organization, rather than just simply a group.

It has various different sectors and divisions such as the music division, info division, Chinese affairs division, weapons division, and the fashion division. It is thought that it has some form of trade and business division as on the last chapter there is a photograph of Niijima, surrounded by other businessmen this implies heavily that the Shinpaku alliance is now a globally recognized organization.

The Commanders are ranked as the Alliance's most capable fighters, besides Kenichi, and thus in lead of the Alliance's activities right after Nijima. A majority of them were former Ragnarök members until the said organization broke up and Nijima started recruiting some of their more capable members for his cause. Only Ukita and Shiratori are given the rank of Vice-Comander as they are regarded as not nearly as powerful as the others in terms of combat ability, but are combatants no less. The main force of captains are very powerful but not as powerful as Expert and Master class fighter. All Captain and Vice-Captains are High Class Disciples and Middle Class Disciples.

This was mentioned in the manga, chapter 583. Niijima, is having a celebration for Kenichi's award winning novel, which is later revealed to have been his adventures in Ryōzanpaku. Shiratori checks in with Niijima about how Raichi Li is doing and how well they are handling business in China. Niijima is somewhat surprised that they managed to succeed to such an extent. The only known member of the division is Raichi Li.

The Shinpaku Alliance's Fashion Division is operating under Shiratori and the Vakyries. They are seen testing new perfumes.

The Music Division consists of Hibiki Kugenin, Chiaki Yūma and Shinnosuke Tsuji who form a band together, and were, most notably, seen performing at the Nippon Budokan. In the last chapter Niijima is informed by Kurokawa that the Music Division is going strong. They are one of the main (but not sole) sources of income of the Shinpaku Alliance.

The Weapon Division is lead by Frey and her Valkyries.

This is the main information team that Nijima uses in order to gather intelligence on certain topics. They often employ Loki's services to gather information from Yami and Yomi.

It was once funded by its own party members and relies on management skill of Haruo Niijima, this was especially distinctive when the Ryōzanpaku went bankrupt, the entire Shinpaku Alliance was then funded entirely by Siegfried such as being able to afford Kisaras' old base to use as headquarters. However, now that the corporation has expanded to such a great extent it is now self-sufficient and able to sustain itself, through the music division, fashion division and possibly other divisions and sectors that it has. It has constant and persistent financial and commercial success seen when Matsui and Kurokawa are on computers and Matsui reports that they have improved again this month, brining them closer to their goal of shares of the organization to the public.

The Shinpaku members participating in the DofD Tournament

Shinpaku getting ready for the DofD 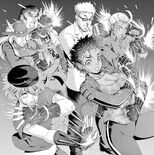 Disciples vs Disciples
Community content is available under CC-BY-SA unless otherwise noted.
Advertisement