Start a Wiki
This article is about the team under Freya's command. For its ex-member, see Kisara Nanjō.

The Valkyries is a unit of eight girls under the command of Kaname Kugatachi. They we're once apart of Ragnarök, Later joined the Shinpaku Alliance after Haruo Niijima recruited the group.

They are all very loyal to Kaname (addressing her as Freya-sama, Lady Freya in the English version) and follow her ideology that women can only be as strong as men if they use weapons, an ideal that was not shared by former member Kisara Nanjō. Kisara eventually quit the Valkyries since she believed that weapons were not the answer and resolved to become stronger than Kaname by training her own body instead. Other than Kaname, the Valkyries are led by Chisato Ayasaki.

The Valkyries first appear to attack Kisara for possibly betraying Ragnarok. However, Kisara is unable to fully fight back due to protecting a young kitten from harm. Miu Fūrinji and Kenichi Shirahama come across the scene and Kisara gives the kitten to Miu so that she can take it to the vet. Kenichi saves Kisara from further beating, but refuses to fight the Valkyries because of his refusal to hit girls. Instead, he grabs Kisara and runs away, with the Valkyries in hot pursuit. They are eventually cornered by the other squad until they are rescued by Shigure Kousaka, who cuts all the Valkyries clothes off and destroys their weapons (with a spoon). They vow vengeance as they flee. Later, they accompany Kaname to defeat Kisara and Miu, but Miu pretty much defeats all eight of them with little effort.

The Valkyries are basically minor characters in the Yami arc, only shown from time to time training with Kaname and Kisara. When Kaname and her grandfather Danki Kugatachi are kidnapped by the men of Agaard Jum Sai, they all request to accompany the rest of the Shinpaku and Ryōzanpaku to rescue them. However, Shigure forbids them from going and trims them naked with a video game controller, saying that their current strength is not sufficient enough to face Yami. Reluctantly, the Leader decides to entrust the rescuing of the Kugatachi clan to Kenichi. Later, after Kaname and Danki are rescued, the Valkyries are seen cheering the return of their leader by parading around Danki. 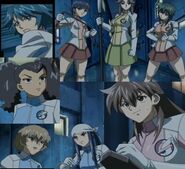 From the HSDK guidebook.
Add a photo to this gallery
Retrieved from "https://kenichi.fandom.com/wiki/The_Valkyries?oldid=40414"
Community content is available under CC-BY-SA unless otherwise noted.