Hailing from the Black Tiger White Dragon Alliance in China, a rival organization of Ma Kensei's Phoenix Martial Artists Alliance; the team is represented by Kaku Shin Ten (Taichi Clan), Chou Yin Lin (Bagua Clan), and Yo Tekai (Shin Yi Clan). They are Kenichi and Miu's first opponents in the tournament. The team fights by deploying a special formation which combines the circular movements of the Baguazhang, straight movements of the Shin Yi-ken, and spiral movements of the Taichiquan. The match eventually was won by Ryouzanpaku when Kenichi defeats Kaku after a long and grueling duel. Upon their defeat, the Three Headed Dragon leaves their organization and is shown to have returned to Japan with Renka Ma in chapter 309, with assassins sent by the organization in hot pursuit of their trail. After Apachai defeats Kei Retsumin, the three work in Uncle Hakubi's Restaurant for minimum wage and to repair the restaurant that was damaged overnight, allowing Renka to transfer to Kenichi's school. 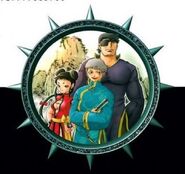